If you have comments, questions, or concerns about the archive, please contact Manuscripts and Archives: mssa.assist@yale.edu.

The original printed copies of the Yale Daily News are housed in Manuscripts and Archives, Yale University Library. 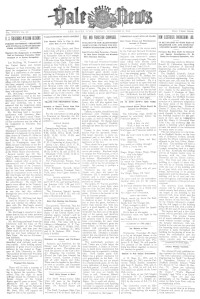 The Yale Daily News, founded on January 28, 1878, is the oldest college daily newspaper published in the United States. The Yale Daily News Historical Archive provides access to digitized versions of printed issues of the Yale Daily News. The full text of these issues is indexed and searchable through the web interface. The historical archive begins in 1878 and ends in 1995 and access to the digital content is open to the world, representing 20,623 issues (including some special issues and supplements). Every issue held at the Yale University Library was scanned, although in some cases issues were missing from Yale’s collection. We were able to fill in some but not all missing issues through the cooperation of the Yale Club of New York City.

In 2021, an anonymous Yale College alumnus made a significant gift to the Yale University Library in support of the Yale Daily News Historical Archive project. This generous gift facilitated the migration of the Archive to a new and more user-friendly platform, will facilitate the addition of issues from 1996 to the present, and will help ensure the Archive’s ongoing maintenance and preservation.

For more than 130 years, the Yale Daily News has been the primary source of news and debate at Yale. Typically published every weekday when the University is in session, the newspaper is the oldest college daily in the United States. Many of the paper’s student editors, writers, and contributors have gone on to prominent careers in journalism and public life, including William F. Buckley, Lan Samantha Chang, John Hersey, Joseph Lieberman, Samantha Power, Sargent Shriver, Paul Steiger, Strobe Talbott, Calvin Trillin, Garry Trudeau, Jacob Weisberg, and Daniel Yergin.